We enter the space and settle down along the edges of the room. Like a well-trained pack of sheep we leave the center for you – to perform. You’ve taped to the floor a wire connected to the overhead amplification system. It leads to the very center of the space—the audio output visible to us all. The buzzing sound of the exposed output electrifies the room more than usual—forcing people to speak a little louder in order to hear each other. There’s a vibration: a consistency in the space you’ve set—a base note to play off of. The hum is both alarming and soothing, a foreboding warning and a disarming lure. After a while we forget about it, but it is still there. 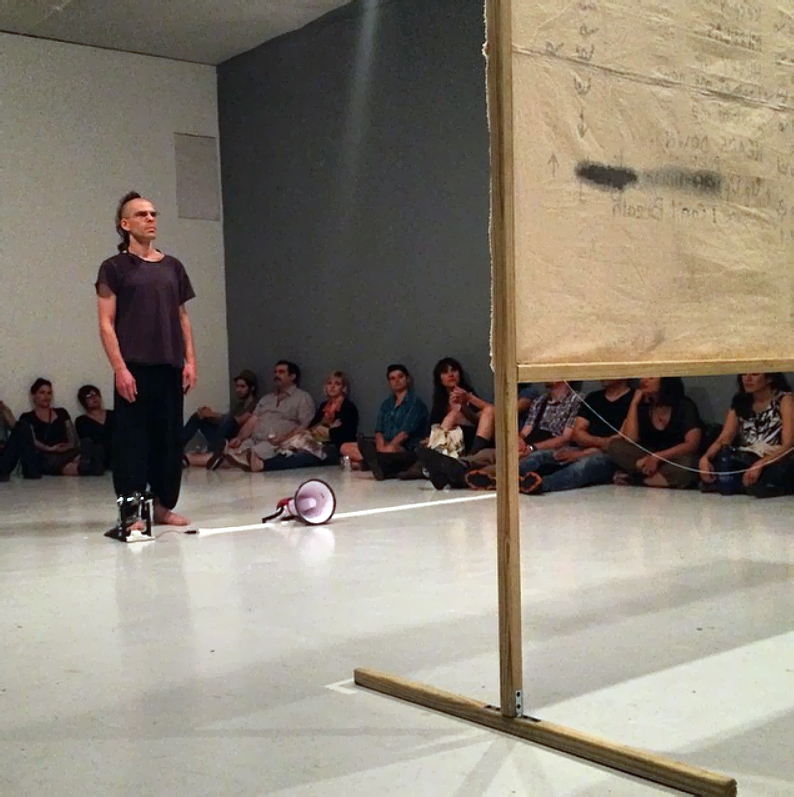 Paris Legakis’s “Exercising the 11th Limb” focused on the murder of Eric Garner (July 17th, 2014) and the now widely recognized cry and call for help: “I can’t breathe.” Entering the room with a large panel made out of fabric and held together by a wooden structure, aided by another individual, Legakis launched into a half-hour performance in which he read, performed, and repeated a sequence of texts and gestures marked onto the panel. Sometimes shouting at the top of his lungs, and other times waning from fatigue and the durational nature of the work, Legakis repeated a series of commands accompanied by arm gestures: “Don’t make a move, I kill you”, “Malaka”, “Everybody hands like this”, “Put your hands up”, “Look at me”, “Don’t make a fucking move”, “Hands up everybody”, and so on…

You use the audio output and connect a drum pedal to it. It acts as a stomping device, permitting you to punctuate your words and gestures with a stomp. I expected it to be louder, like a gunshot, but instead it feels stifled: like the crack of a baton. It doesn’t echo or resound in the room. It fails to impress. Offering a whimper instead of a boom. Your voice is much more powerful, as your shout it travels in and across the space—through the bodies of your audience. Should we intervene? Should we raise our hands? Should we throw you to the ground? Should we join you? Should we…

Instead we standby…standby watching you perform. Standby as you become both victim and perpetrator—both accuser and sufferer.

At the end of every cycle, having gone through the list of gestures and calls to order, Legakis throws his arms around his neck and exclaims: “Can’t Breathe”. Performing a chokehold on himself, he counts up from one…two…Breaking away from this suffocating position he continues to scream, gesture, and read the written commands. The repetitive nature of the piece creates a certain tension—around the predictability of the act and the failure of the body to maintain such a high rhythm and pace. Legakis’s voice grows horse, the beads of sweat accumulating on his forehead, the audience hanging on his every word and movement. Each segment of “Can’t Breathe” becomes a marker of time—progressing towards what everyone in the room knows to be a certain end. This is where the piece conceptually makes a powerful claim, fluctuating in and out of the particularities of the Eric Garner event and into a more fluid and generalized sense of protest, social unrest, and dissent. The short but recognizable sentences “Everybody hands like this”, “Put your hands up”, “Look at me”…become abstract and a marker of 20th century civil unrest, while the sentence “Can’t breathe” brings us immediately back to Eric Garner and the widely circulated video of his murder.

Because of where I’m seated I can’t see the writing on the board. Instead, I only have you to watch. This makes the piece more complicated, since the score that you are reading is hidden from me. Instead I rely wholly on you to guide me through these stages you’re taking us through. You move between English and Greek, uttering a swear word I vaguely recall: “Malaka”. This shift in language, brief but noticeable, is important since it displaces the original proposition of the work. Dressed entirely in black and barefoot you look both like a performer and a protester—in America and in Greece. Bridging worlds and struggles, tying in plights and revolutions: a self-imposed ideological chokehold suggested by the European bankers on Greece. I can’t help but notice that you’ve taken off your glasses and carefully placed them on the floor—why? Can you still read without them? Do they not make you look serious enough? What kind of clarity or blurriness are you looking for?

The performance ends with Legakis picking up the megaphone from the floor and pressing a button that starts the incessant and aggressive sound of a siren. Legakis then walks out of a side door, leaving the audience to sit and stand while the wailing of the siren floods the room. Once again, sound is key, as the original starting buzz of the exposed audio cable is turned into a loud and obnoxiously overwhelming siren. Echoes of a police horn are obvious here, however more importantly Legakis continues to play on different soundscapes moving from initial buzz; to punctuated screams; followed by silent breathless moments; towards a final wailing. This is the cry caused by the breathless silence—the overwhelming mechanical noise of authority drowning out the eleventh and final “Can’t breathe”.

As you walk out, leaving us with this siren and horn, all of us seem puzzled. You came, asked us to ‘not make a move’, ‘put our hands up’, ‘not make a fucking move’, and we did nothing. We looked at you, as you self-inflicted a chokehold and claimed that you couldn’t breathe. We looked. And now you’ve left us with this horn—and we all know you’re not coming back. Finally, someone (a fellow performer who made work before you in the evening) walks up to it and turns it off. He intervened. Ended it. By then people have already started to file out—not wanting to see the action until the end. Overwhelmed by the sound most likely. More interested in leaving than staying to see it end. I’m surprised at my disappointment when the horn goes off—11 times I did nothing—and now it’s too late. No longer able to sit in the moment, struck by the silence of the room now, I also walk out.

Didier Morelli is presently a PhD student in Performance Studies at Northwestern University. As an interdisciplinary artist, Morelli combines practice and research in both his academic and performative explorations. His live art practice includes endurance-based durational actions and contextually specific relational interactions.

Previous post The Garden of Earthly Delights: Out of Sight Out of Mind by Weeks & Whitford
Next post Mixed Realities and Inflatable Tits